I will start this post by quoting a friend of mine who is a venison exporter in South Africa:

"According to regulations we have to get carcasses down below 7 celsius within 24 hours. We use potent chillers but in summer that's virtually impossible to achieve on an Eland carcass because the carcass is so big and the cooling curve takes too long to come down"

The above quote refers to what is known as Primary Chilling, which is the first stage of lowering a carcass temperature post mortem. Primary chilling is considered complete when the warmest part of the carcass has reached a temperature of 7 degrees celsius.

But the opening quote is by someone who exports venison for a living, and has all the necessary means to achieve that, and yet still struggles to do so when handling large game like Eland in hot climates or weather conditions.

Bear in mind, that cattle pale in comparison the the physical size of an Eland. A cow from a feedlot might slaughter out at a carcass weight of 230kg, where the largest Eland bull the abovementioned exporter ever processed, slaughtered out at a weight of 556kg! This is a very important point to note, because the larger the animal and the greater the muscle mass, the longer it takes to bring down the temperature of that carcass.

From time of death, the hunter or culler is in a race against the clock to steadily bring down the carcass temperature. If the carcass is not cooled properly, a number of things can and eventually will go wrong:

The bone marrow can spoil and produce what is know as "bone taint" or "bone sour", it is very unpalatable and produces sour and "off" odors from the inside out. It is important to note that bone taint can occur due anaerobic OR aerobic bacteria, meaning the presence of oxygen is not necessary for this reaction to occur.

Areas of the carcass exposed to oxygen can also spoil on the exposed surface due to aerobic bacteria proliferation, and this is probably the most common form of meat spoilage that the average consumer will experience.

Both situations are only avoidable through correct temperature control.

The first step in post mortem handling, is to eviscerate the carcass: remove the stomach contents and internal organs, as these decompose or spoil faster than the rest of the carcass. The stomach is also full of bacteria which are a further risk to contaminating the meat. Remember that one bad apple spoils the whole bunch, so this is just another good reason to not pierce the stomach and get stomach contents on the meat, aside from the smell.

During evisceration (gutting the animal) microbes from the coat of the animal, which includes spoilage and pathogenic bacteria, ends up on the meat. This is unavoidable and happens during the slaughter process no matter how hygienic one is. The issue at this point is how much of this bacteria is allowed to touch the surface area of the carcass which is exposed to oxygen, as spoilage bacteria thrive on oxygen. (This is why meat is vacuum-packed, as it inhibits aerobic bacteria from multipying and spoiling the meat).

Below is an image of a venison carcass which was culled, not hunted, and which took too long to cool down. Notice the spoilage first becomes visible as faint yellowish discoloration, eventually turning greenish-grey.

When an animal is alive, the muscles have a pH level of 6.8-7.3. Post mortem (in other words, after you've killed the animal you were hunting), the pH level will begin to drop until they reach a range of between 5.4-5.8 at the onset of rigor mortis. The specific action by which this takes places is that animal's glycogen stores convert to lactic acid post mortem and thereby lower the carcass pH.

Dependant on time and temperature, meat eventually will begin to decompose, and the first sign of this, before human senses are able to detect it, is that meat pH will begin to rise again back up towards 7 and even higher. This can be seen in the images below, taken by us on various loads of venison we have received: 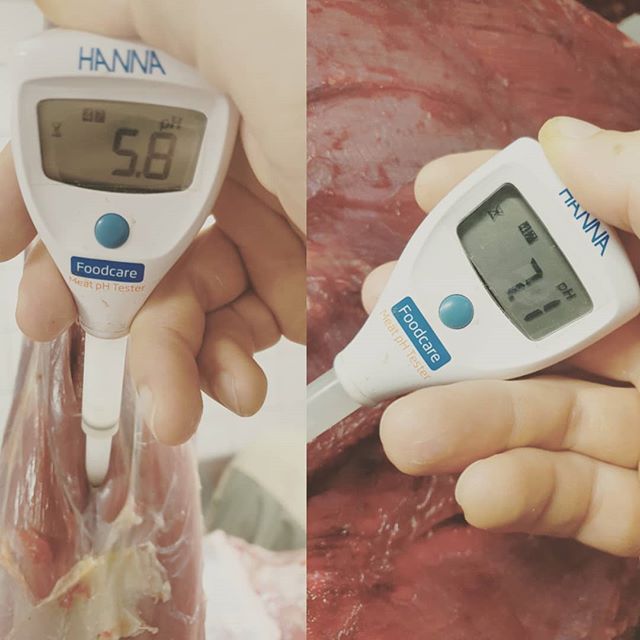 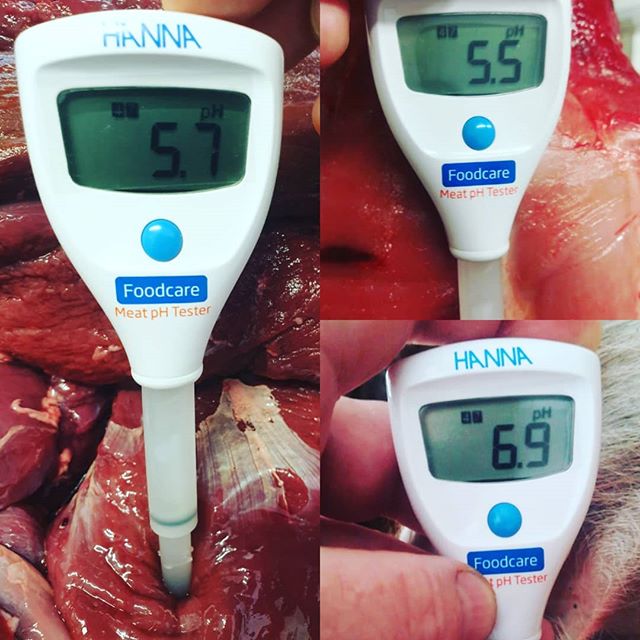 Some of the readings above are below the 5.7-5.8 ideal as mentioned above,and this will be explained in Part 2 of Post-Mortem Handling.

There are times when animals can be subjected to enough stress and phyiscal exertion over a protracted period of time, that they deplete all of their glycogen levels in their blood and therefore the pH level of the carcass cannot drop as expected, resulting in a high carcass pH, which can remain as high as 7.

This is particularly more likely to occur when handling wild animals due to unpredictable hunting or culling conditions coupled with the fact that wild animals have naturally higher stress levels. As an example, game animals often die during transport simply from the stress, which is far less likely to happen with domesticated species.

However, the usual culprit in a carcass having high pH, particularly in the hunting industry, is that the carcass temperature remained too high for too long.

The obvious question at this point is: What does carcass pH matter?

Well, for starters, as already stated, it is in good indicator of how the carcass was handled in the first place, and we know that at a given temperature, meat with a higher pH will spoil faster than meat with a lower pH.

We also know that it could be an indicator of how the animal was treated or handled PRE MORTEM, which not only affects meat quality but is also an issue of ethical treatment of animals.

The next point is that spoilage and pathogenic bacteria have preferred conditions for growth, and the closer your pH is towards 7, the faster those bacteria multiply. This is a key principle in producing hygienic charcuterie that is safe for consumers and i will do future posts on pH control.

Finally. carcass pH can be used to our advantage in deciding how to process our carcass, whether for fresh whole cuts or for sausage or for charcuterie. Why?

Because meat pH level is also an indicator of water holding capacity of meat, which will affect its perceived tenderness when cooked, and whether it is usable for dried products, as higher pH meat will retain water for longer, thereby extending drying times while simultaneously being a more favourable pH level for bacteria proliferation.

This all leads us to the following topics, some of which belong as subsections of post mortem handling of meat, and which will be covered in future posts:

A photo of a table full of Blue Wildebeest backstraps which we processed. pH of 5.7, slaughtered and chilled perfectly.